IT Easter Eggs and Where to Find Them

Maybe it’s just me, but I usually got the short end of the stick when it came to Easter egg hunts. The only eggs I got to “find” were the ones my mom made no attempt to hide. Consequently, she would act as a human flare gun to simultaneously lure me to the goodies while warding off the predatory older kids looking for an easy kill.

Unfortunately, the number of Easter eggs I’ve collected over the last decade has rested at zero. I think it’s time to re-experience the joy of discovering something hidden. This time, instead of satisfying our sweet tooth, we’re going to revel in our not-so-hidden geeky enjoyment of tech. We’re going on a IT Easter egg hunt. And like mother like daughter, I’m going to make their locations painfully obvious.

Note: Easter eggs pop up and disappear everyday. The following tech Easter eggs were functional as of 4/12/17.

Google is the nest where tech birds go to lay their IT Easter eggs. The golden egg of Google is Chrome’s T-rex runner. Perhaps created to mitigate impatience, the dinosaur that appears when Google can’t connect to the internet becomes an effective distraction with a click of the space bar. You’ll forget all about your failed attempt at checking Facebook when you’re busy jumping over cacti and dodging pterodactyl.

Google also plays games without ulterior motives. Ever have the burning desire to play tic tac toe but didn’t have an opponent? Ask Google to play by searching “tic tac toe.” You can also search Google images for “atari breakout.” Reminisce in the 70’s classic scrolling game, but beware the speedup! Who says you need to pay 99 cents to play games?

All games aside, Google’s Easter eggs can be pretty handy. If you happen to have lost the dice to Settlers of Catan because someone broke their five game winning streak and flipped the table (whoops), Google has your back.  Search “roll dice” for a randomly generated dice roll.

Need help making a decision? Google search “flip a coin.” There’s even a search for a “spinner” for more complicated choices of up to 20 options. That’s right, Google can settle the “what movie will we watch tonight” dispute to make up to 19 of your friends unhappy!

On Google maps, cut down your travel time from Snowdon to Brecon Beacons in the UK by over 80% by taking a dragon. For Harry Potter fans, tour Fantastic Beast locations by searching “Fantastic Beasts, New York City.”

Explore Google’s sense of humor by searching “recursion.” You will be asked, “Did you mean recursion?” Check the definition to understand the sass. Repeat the 1. search, 2. see “did you mean,” and 3. check definition process with “anagram.” If you don’t like wordplay, you can ask Google the answer to life the universe and everything, what the loneliest number is, or to give you a fun fact.

Lastly, here are a few Google Easter eggs purely for your nerdy amusement: 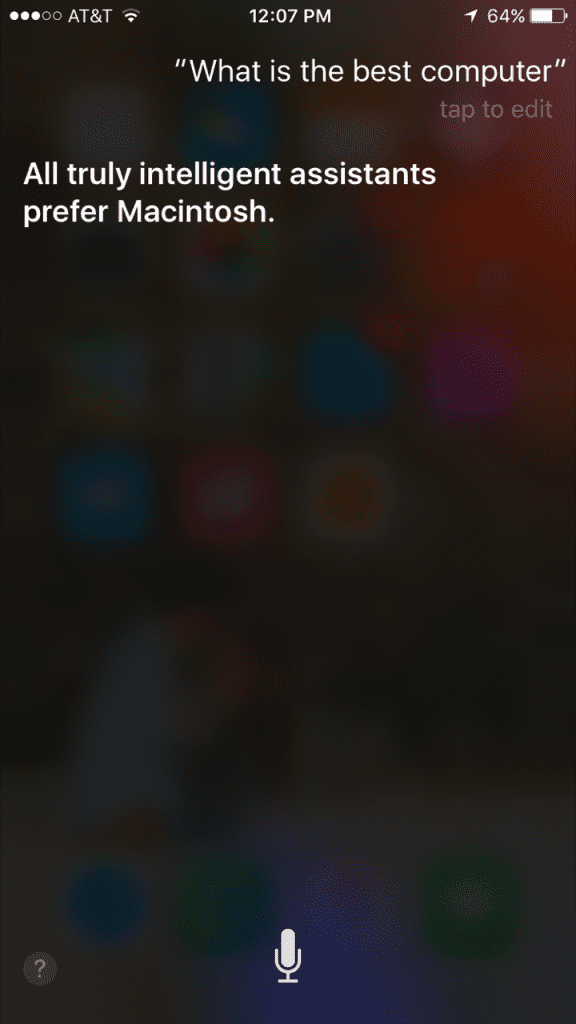 Google isn’t the only Silicon Valley Giant with IT Easter eggs. If you need a computer generated friend that actually talks back to you, Siri is your gal (unless you changed the voice settings to be a man, then he’s your guy). Aside from the useful responses, there are hundreds of teasing phrases that will provoke a snappy response from Siri. Try out my favorite six:

“What does the fox say?”

“What is the best operating system?”

“What is the best computer?”

For Harry Potter fans on team Android, use the “OK Google” feature to cast spells on your phone. “Silencio” will put your phone on silent so you don’t wake up the sleeping troll in the girls’ room. “Lumos” will turn on your flashlight to use while you’re clearly up to no good (sneaking around the forbidden section of the library for instance). Finally, “Nox” will turn your phone off because if you really are a wizard, your phone is the last way you want to spend your time.

Facebook messenger can be used for more than just initiating scams and sending random videos to your friends. If you send a basketball emoji to a friend then click on the basketball, you’ll start a shoot off competition.

We’ve all been stuck in a YouTube binge where the “up next” feature is more in control than we are. If you ever feel the need to reassert your authority, search “Use the Force, Luke” in the YouTube search bar. It allows you to do some pretty psychedelic manipulations to the page.

The next tech Easter egg is found in Microsoft Word. In any Word document you can type “=rand(x,y)” followed by the enter key and it will add a bunch of random words. The x represents the number of paragraphs you want, and the y is the number of sentences in each paragraph. It’s useful for college students who are too lazy to write their own essay fluff.

Who doesn’t love a good search engine feud? In fact, Mozilla Firefox is religious about their feud. In the Biblically reminiscent “Book of Mozilla,” Firefox tells the tale of their rise against Microsoft’s Internet Explorer. While keeping with the theme, they refer to themselves as the “beast,” their followers as the “legion”, and Internet Explorer as “mammon.” Read the six verses by searching “about:mozilla” on Firefox. If you’re looking for something a little less cryptic, find our last IT Easter egg by searching Firefox for “about:robots.”

Whether it’s a hidden gem or a subtle inside joke, the developers behind these tech Easter eggs sure mixed work with play. This is just a small sample of the IT Easter eggs that are out there. There are hidden surprises all over the internet and tech world. So that means you get to egg hunt year-around, and you don’t even have to fight off the other kids! Happy hunting, and happy Easter!